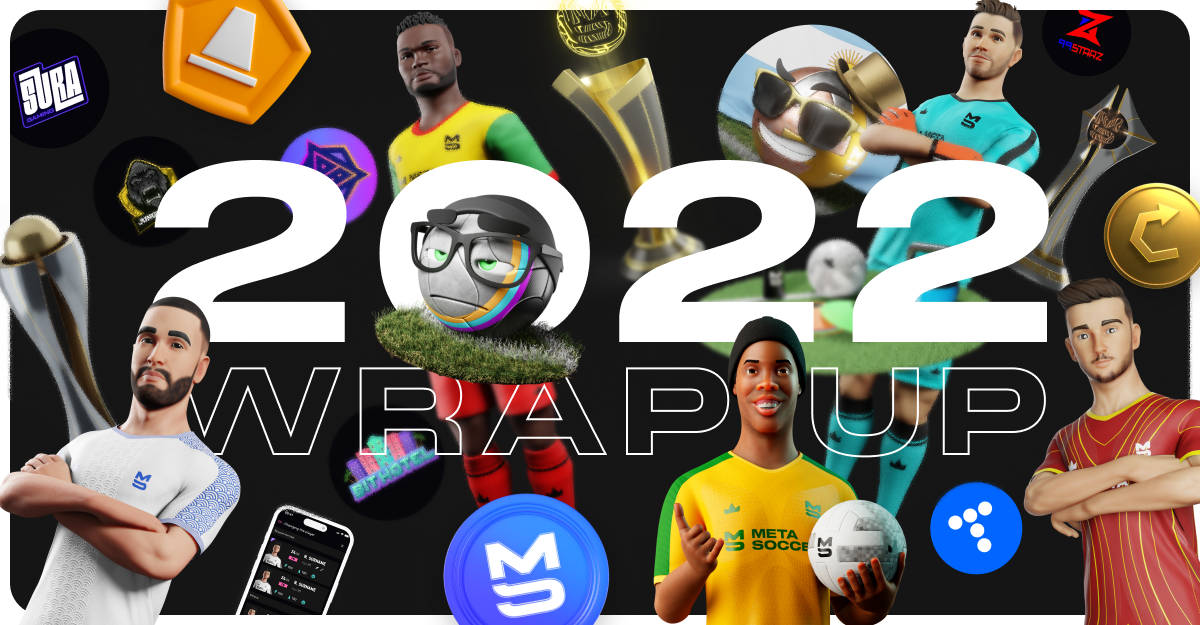 The year went by in the blink of an eye, but at the same time, we look back and see how much the soccer metaverse grew in only 12 months.

Strange how time and the year unfolded!

Let’s look back and tally everything we achieved together!

And tell us about your favorite project and accomplishment.

With MetaSoccer’s launch in 2022, sports competition in the metaverse was transformed. And it took a village indeed. We cannot stress enough the importance partnerships have not only for MetaSoccer but for any metaverse project and in any web version. Working together with other teams bring advantages and allow everyone involved to exponentially grow and learn.

To take the game further, the help from influencers gave us an essential boost, so we’d also like to thank Kojisan, Malcaide and Willyrex for their work in making MetaSoccer a better game and known by many people.

Having Brazilian club Vasco da Gama enter the metaverse as the first professional team was also a huge accomplishment.

Last but not least, Emiliano Martínez joined the Icons Series, becoming the first goalkeeper to enter the soccer metaverse, after the presentation of Thomas Partey back in December 2021. Superstar Ronaldinho agreed to be part of MetaSoccer as an official licensed NFT, shortly followed by Real Madrid’s defender Dani Carvajal and PSG player Pablo Sarabia.

When talking about the evolution of a game, the gameplay is a key element. It’s what we work for every day, and it’s your touch point with us and the metaverse.

We started out the year with the first Scouting, which brought the first players to the soccer metaverse. Now that we had all the necessary elements to start playing, we launched PvE matches and allowed users to start managing teams. We also introduced the possibility to delegate teams, an essential step to onboard more guilds and scholars.

The Tactics section was a huge leap forward in making the game closer to real soccer — allowing users to define team mentality, passing style, and play zones, making the game much more interesting. We know it was among one of the favorite evolutions.

But, what is a soccer team (even if it’s a digital one) without its own brand? We heard user requests and launched the possibility for players to name their clubs and create badges to identify it.

Then the matches! It began with the Genesis Tournament, during which we put managing skills to the test by participating in weekly PvE competitions.

Training was one of the most important features released — it allowed users to start improving players and, consequently, team performance.

Just before the launch of the beta version of PvP matches, we integrated end-of-match stats, an essential report that allowed a better evaluation of  actics and lineup selections.

And then it was time for the real deal. At the end of the year, we held the World Cup Tournament, MetaSoccer’s first real PvP tournament, with huge rewards to the best teams in each division.To end things with a sweet note, we introduced MetaSoccer League, the new version of our biweekly PvP competition, testing player expertise in managing a soccer team.

While we focused on launching gaming features, other parts of the project also had to be developed.We had two successful Youth Scout drops at the beginning of the year, which set the stage for what was to come to the soccer metaverse.

MetaSoccer also launched its own marketplace, where players, scouts, and later complete teams could be traded.

MetaSoccer Cash ($MSC) was released, the secondary token of the game that is key to the economy of the project. And even before playing the game, players could make money from the project, either by staking Youth Scouts during the Conference Tour or by staking $MSU on Tokensfarm.

To attract new users we created Crypto 101, a series of tutorials to help people navigate the challenges of Web3, where we taught about NFTs and play-and-earn, and also how to create a crypto wallet and how to buy cryptocurrencies, among others. These tutorials helped our community get on the same page and start strong.

Another key step to open the doors of the soccer metaverse for everyone was the opportunity to buy $MSU and Bundles with a credit card, as well as the integration of a custodial wallet. These were important purchasing and storage options that help users enter the game quickly and with more security.

MetaSoccer’s DAO, the Champions Council, held its first voting, regarding the scouting system, thus reinforcing the importance of our community’s opinion when it comes to making decisions that affect the game as a whole.

Along with the integration of in-game training, we created the Training Token, an essential asset to allow users to best improve their teams.

In a world where mobility is key, we combined efforts to offer access to a mobile version so that MetaSoccer can be available on the go.

And we must mention The Wilsonz, a special NFT collection launched to celebrate the Qatar World Cup, which was one of our biggest successes.

There was also time to mingle and meet some of the members of our community and partners, whether in person or online. We participated in a series of AMAs and Twitter Spaces on some of our partners’ channels and hosted some of our own.

MetaSoccer was also present in some of the most important crypto events in Spain, and of course, who can forget the huge presentation of Ronaldinho as a licensed NFT — certainly one of the highlights of the year. We also got together online nine times to share with you first-hand the newest game developments in our Locker Room, and we’d like to thank all of you that participated!

All in all, it was certainly a great year in the soccer metaverse. We hope you enjoyed yourself as much as we did exploring the game, and we can’t wait to see what 2023 has for all of us!