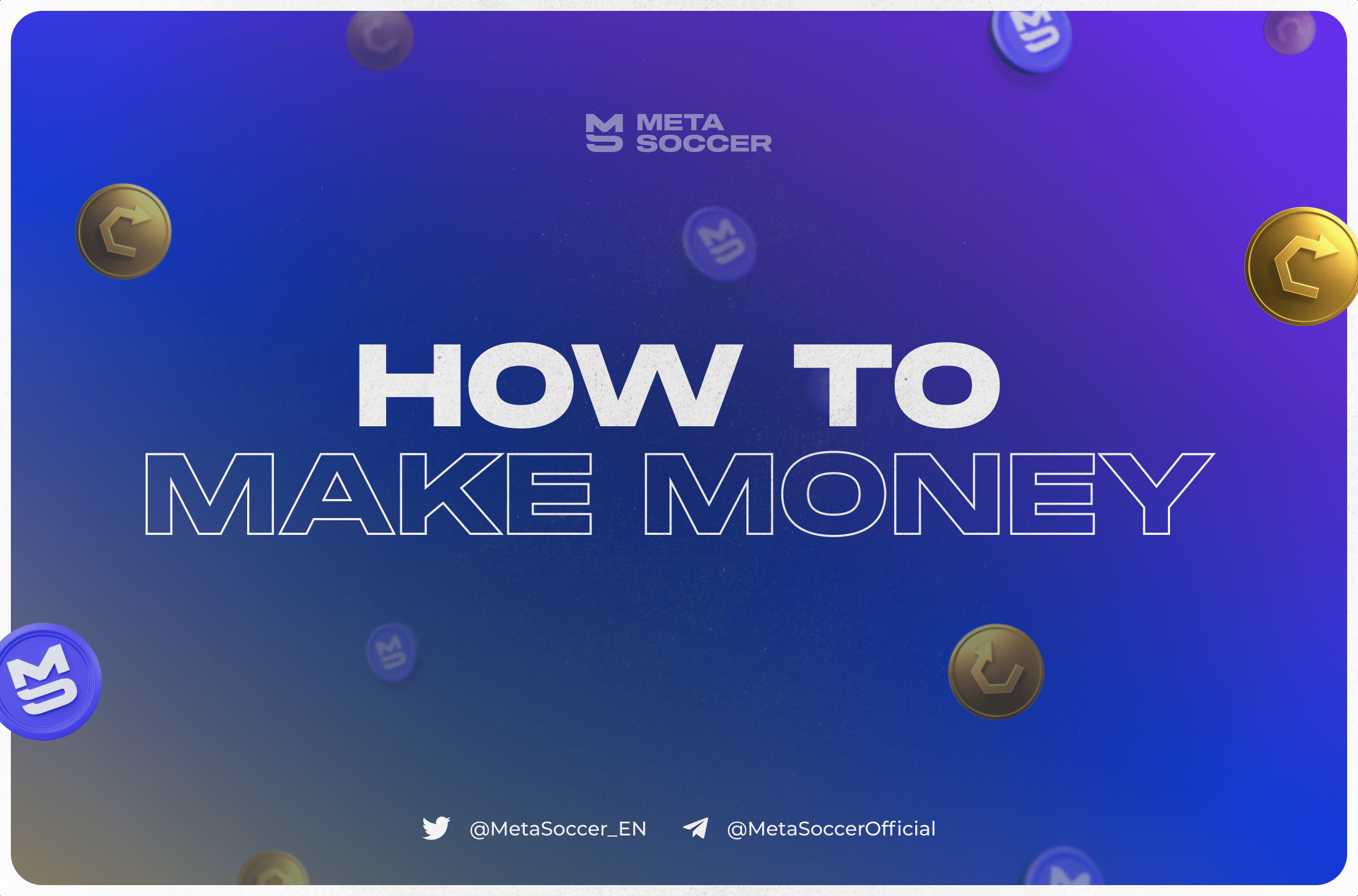 How To Make Money At MetaSoccer

When developing MetaSoccer, our team had two main goals:
- Create a fun and engaging experience for soccer fans.
- Provide multiple ways to create an income while playing.

Now, with the PvE mode and full $MSC rewards released, it is possible to start making money in several ways. As the game continues developing, we’ll also continuously add new features that will provide other sources of income.

Let’s check them out:
‍

The launch of friendly mode matches (PvE) made it possible for players to start creating revenue out of their team management skills. Every time you win a match you’ll get your fair share of rewards. Being a play-and-earn game, you are also able to make money just by playing — you read that right! Even if you tie or lose a game, you still can take home a few $MSC, as you can see in the table below.

During only the first three weeks of PvE mode, we distributed over $95,000 in U.S. dollars in playing rewards!
On average, any player can win 50 $MSU per day. Because many factors are involved, there’s no guarantee as winnings fluctuate.
Once matches in career mode (PvP) are released, the same logic will apply, and rewards will be higher

Finishing the season in the top positions

The rewards for the teams that can get on the top positions within their divisions will be distributed when the season is over.
MetaSoccer will also integrate weekly rewards for PvE mode. According to the tier potential in which your team is on, you can compete for the ranking and get extra compensation at the end of the week, as according to the table below.
Once PvP mode is released, we intend to start making tournaments and the game will naturally evolve to a league system, similar to the one we can find in real-life soccer.

Like in real-life soccer, the trade of players may become one of the biggest sources of revenue for a team. You may either sell players who have been discovered by your scouts, or acquire players in the marketplace, improve their capabilities and resell them for a higher value.
The record sale of a player is 18,000 $MSU, which is currently $USD 1,500.

This feature isn’t yet available in MetaSoccer’s marketplace but rest assured we are working on it! The idea is instead of listing a player for sale, you can put it available to be borrowed — the value and time period are defined by the owner. The player will be integrated in the team that borrows it and will return to the owner’s wallet after the borrowing period is over.

In the future it will be possible for users to charge commissions on future sales of their original players. We intend this feature to mimic trades just like they are currently negotiated in real soccer. Imagine you have a player with great potential but you are in need of selling it. You may define a commission on future sales, so if that player is sold to a different team, will get a percentage of the value of the sale.

You always have the possibility to sell your acquired youth scouts, or the ones that are mentored by members of your team — a feature that will be released in the future as well. All you need to do is define the price of sale and put it up in the scouts’ marketplace.
‍The current record sale of a youth scout is 1.9 ETH, close to $USD 5,000, which represented a profit of over 4,000% at the time of the sale.

As the metaverse evolves, sponsorship contracts for the most popular teams are also in sight, and you’ll be the one benefiting. This may happen in many different ways, like having sponsored ads during your team’s matches or branded equipment, just to name a few we have in sight.

Integrating stadiums in the soccer metaverse can create almost endless possibilities of generating income. If you end up owning a stadium, you may rent it to other teams who want to play matches there or who need a place to host an event. The value will, of course, be defined by you.

Teams who have stadiums will be also able to profit from ticket sales for fans. As it happens in real life, we are sure the demands for the most popular teams will be higher than the supply, so there will be many opportunities to generate revenue.

We are just getting started! Join MetaSoccer — come have fun and make money at the same time.