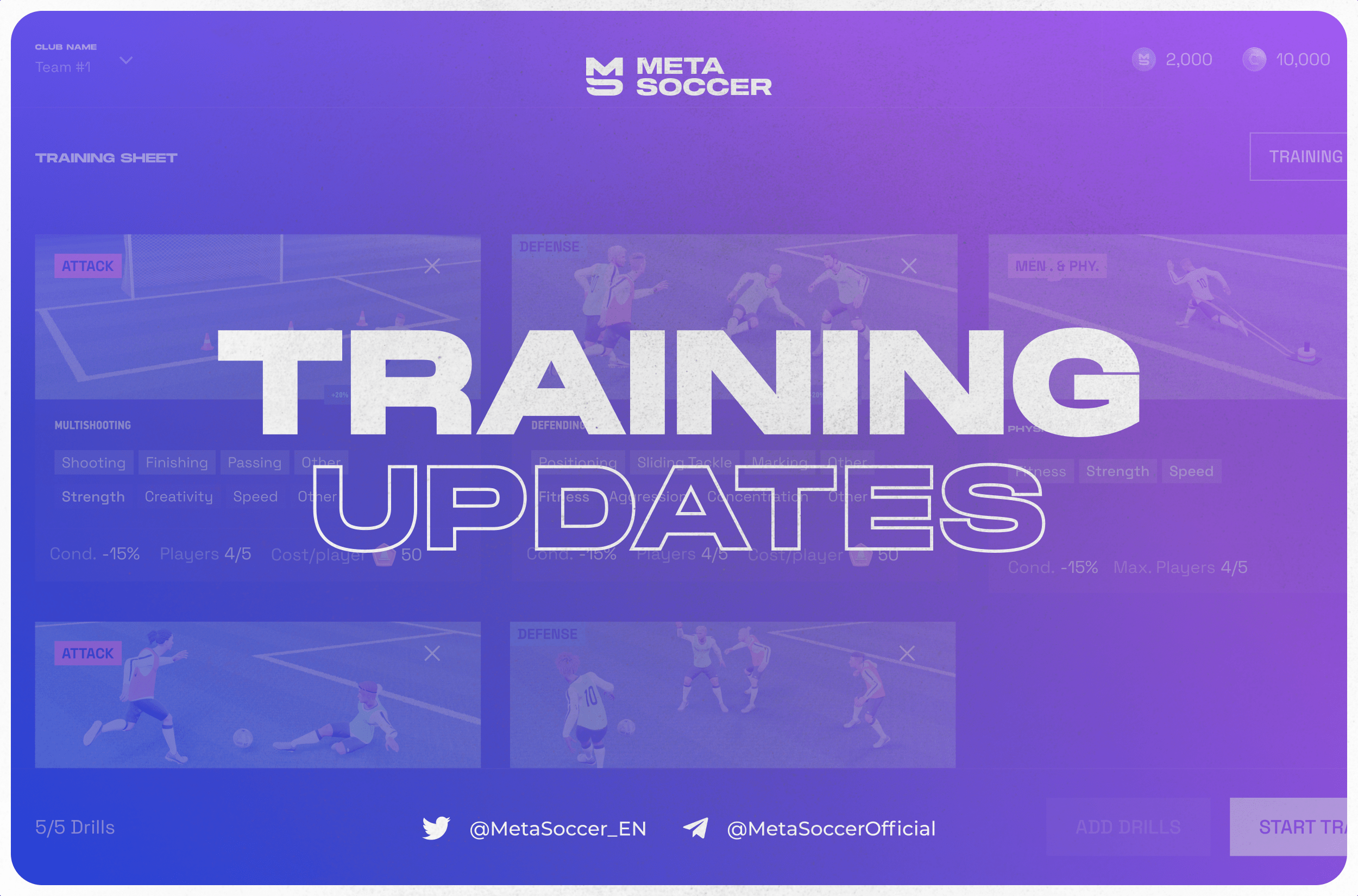 Training is one of the most recent features released in MetaSoccer and an essential part of the game. Why? It allows you to improve your players’ skills and increase their overall.

Being such an important part of the game, we are perfecting this feature in several ways.

Even though we thoroughly test every feature that we create, it’s only when we implement them and analyze the results that we are able to adjust them to increase their benefit for the gameplay.

The following alterations in training will help you:

As the beginning weeks of training weren’t giving as good results as they should, we also postponed the aging process, which was announced to begin on August 19, giving approximately two weeks of improvement without aging. The aging process officially began September 1, which means that by October 1, all players will celebrate their first birthday in the metaverse. Keep in mind that one month in the soccer metaverse is the equivalent of one year in real life.

The second major change is that we will launch a training token. This is not a cryptocurrency or monetary token but an in-game asset that can be used to access different drills, which will greatly improve your players.

You’ll be able to acquire the training token in MetaSoccer — once you connect your wallet, you’ll see that next to $MSU and $MSC, the training token symbol will appear. To acquire it,  you’ll click on the “Plus” button next to it and get access to the store.

You’ll see that the base price of 50 $MSC is worth 1 training token, and the minimum you can buy is 50. You can find better prices if you buy a higher amount.

As for now, the only way to get training tokens is on our marketplace. In the future, we plan to create other ways to earn this token in the game.

After you get some training tokens, you’ll be able to select paid drills in the Training section.

Special drills for all types of training — Attack, Defense and Mental & Physical —  are divided into two types:

You’ll be able to see the cost per player of these special drills, as well as the skills they focus on and the added percentage of improvement players will receive.

After you select the drills that you want and the players that will participate in them, they are added to your Training Sheet. When you press “Start Training,” you can see the amount of training tokens you’ll have to use, and then you’ll have to confirm if you want to move forward with the special drills selected.

When the training session is over, you will have access to the training results as usual, and you’ll certainly see a greater improvement in the players that have participated in special drills.

You may be wondering why we are introducing a training token instead of allowing you to acquire special drills with $MSC.

As we are getting closer to launch the mobile version, we want to reduce on-chain interactions as much as possible. This way, you can exchange your $MSC for any quantity of the training token, and then you’re free to train and do so off-chain.

The updates on training will improve the results you get, contributing to developing your team’s performance in the metaverse, so use them to your advantage!